When small, impoverished studio Monogram landed Boris Karloff to star in a series of B-movies about brilliant Chinese detective Mr. Wong, they not only got a big headliner but they ended up with a string of the best movies they would release. Mostly.

I already commmented on the three Karloff films in the "Mr. Wong" series that as I think are the best in the series. Click here to read those reviews. That leaves "Mr. Wong in Chinatown" and "Doomed to Die."

The famous private detective James Lee Wong (Karloff) takes it personally when a Chinese princess (Lotus Long in her second appearance as a murder victim in the series) is killed with a poison dart in his own home. He sets out to find her killer, with help from reporter Bobbie Logan (Reynolds), the latest bad-choice-of-dates for Wong's friend, Captain Street of Homicide (Withers). The trail leades to international arms-smugglers, shady bankers, con-artists, mute midgets, and tea-sipping Tong leaders, any of whom may have done in the princess.

"Mr. Wong in Chinatown", the third "Mr. Wong" mystery, is a step down from the previous two entries in the series. The plot is not as engaging as the other films, Street's new love interest/Wong's co-detective is more annoying than charming or funny, and Street himself seems to have devolved from a by-the-book detective who simply lacks Wong's ability to see clues in a different light into a typical, incompetent comedy relief detective. That's too bad, because it makes the friendship between Wong and Street seem phony--why would someone as smart as Wong want to spend time with someone as dumb as Street appears to be in this film? 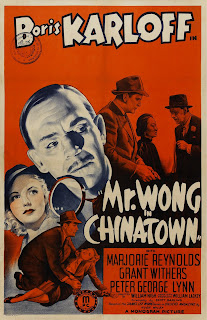 There's also problems with the performances of every lead in the film. The unflappable Wong is almost too calm and detached throughout, and Karloff almost seems to be sleepwalking at times. Reynolds is gorgeous as always, but her character of Bobbie Logan is too shrill in most scenes. Withers does an okay job as Street, but the character is poorly written in this installment, and he really has very little to do.

An unengaging plot, badly handled characters, and subpar performances from the film's leads add up to making this a weak entry in the "Mr. Wong" series. Things start to pick up in the final 15 minutes or so of the movie, and these manage to keep it on the high side of average... but only barely. It still remains a dissapointment when compared to the first two movies and the "Phantom of Chinatown" prequel.

When shipping magnate Cyrus Wentworth is murdered, Captain Street (Withers) immediately arrests the only possible suspect: The disgruntled fiance of his daughter (Stelling), the only person in the room with him when he died. Street's girlfriend, reporter Bobbie Logan (Reynolds), is convinced the case is not as simple as Street believes, and she hires San Francisco's leading private detective James Lee Wong (Karloff) to clear the young man and Cyrus's daughter (Craig) of any suspicion, and to find the true killer. Complications soon emerge, as evidence of connections between Wentworth, Tong criminal activity, and the mass-murder of 400 passengers onboard one of Wentworth's ships are revealed... and Mr. Wong himself comes under fire from gangsters and killers.

"Doomed to Die" is the weakest of the Mr. Wong features. It's sloppily written, featuring a badly structured story that's moves slowly through muddled twists and turns to a fairly predictable conclusion. Street is written like an utter moron, and Wong solves the case more through luck than intelligent investigation. (He also seems to have developed a mysterious ability to show up anywhere and everywhere the plot requires him to be, even if there's no particular reason for him to be there other than plot dictates.)

An effect of the bad script is that Withers is mostly wasted here. His character is relegated to the role of buffoon. Karloff turns in another decent portrayal of Mr. Wong, but the bad script gives rise to many unintentional comedic moments, all relating to his uncanny ability to appear at windows and on fire escapes.

One upside is that the Bobbie Logan character is a little less annoying in this installment than she was in her first appearance (in "Mr. Wong in Chinatown"), and Reynolds' performance is thus a real bright spot in the film... although her good looks certainly help to enliven all the Wong features she appears in! The supporting cast is also decent enough.

Out of all the "Mr. Wong" features, this is one that interested viewers might safely take a pass on.