'The Ghoul' is an obscure Karloff classic

An eccentric Egyptologist, Professor Morlent (Karloff), insists that he is buried with the ancient artifact he spent his fortune on acquiring, in an Egyptian-style tomb on his estate so that Anubis may come and bring him to eternity in the afterlife. He vows to return from the grave and kill anyone who doesn't follow his wishes or who steals from him tomb. Naturally, his manservant (Thesiger) keeps the priceless artifact. Naturally, Morlent emerges from his tomb to punish the thief, and anyone else he happens across, on the very night his young cousins (Bushell and Hyson) are meeting in the main house with a solicitor (Hardwicke) about their inheritance. 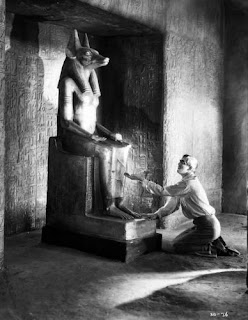 "The Ghoul" is a rarely seen early horror talkie that features a fast-moving, finely tuned script, an appealing and talented cast, a number of truly unnerving scenes, but also manages to deliver comic relief that will still be funny to modern audiences.

While Boris Karloff receives top billing--and gives an excellent performance as a fanatic neo-worshipper of the Egyptian pantheon returned from the grave and now rushing about strangling people in best mummy fashion--the real stars of the film are actually Dorothy Hyson and Anthony Bushell. They protray a pair of distant relatives who start the film disliking each other due to an old family feude but who eventually bury the hatchet. Hyson is very attractive and a good actress and Bushell manages to transform a character who is an unsympathetic jerk at the beginning of the film into a likable hero figure by the end.

Another remarkable performance is given by the film's comic relief, which are made up of a Lucy Arnez/Carol Burnett-type character played by Kathleen Harrison, and a mysterious Egyptian played by Harold Hugh. The Egyptian is actually the films main heavy (aside from the monstrous Dr. Morlent), but he becomes drawn into the comic relief when he becomes th object of fantasy of a woman whose read too many romance novels and seen too many silent movies about the dashing beduine princes of Arabia and their white stallions, abducted maidens, and vast harems.

Often in these old movies, the comic aspects have not stood the passage of time, but that is not the case here. The genre being lampooned may have fallen out of favor, but the basic situation remains funny and the bubble-headed woman who lives vicariously through trashy romance novels remains a constant through the ages. The action is funny, the characters are funny, and the jokes are hilarious.

The only midly annoying thing about the film is the Scooby-Doo like ending where everything with an apparent supernatural cause is explained away either by some weird circumstance or by someone wearing a cleaver disguise and using elaborate tricks. However, the ending is very dramatic--with the climax reaching its thrilling heights with our young heroic couple on the verge of being burned alive and the comic relief character about to shot by the villains--and so action-packed that you will hardly notice the "oh, there was never any spooky Egyptian gods and curses going on here" line when it's delivered.

"The Ghoul" is a great film from the formative days of the horror genre. It's both an example of the "dark old house" mystery movies that gave way to it, as well as a clear evolutionary step toward what we think of as horror movies today. It's definately worth seeing by anyone who enjoys films from that time. Even better, the DVD release was made from such a prestine print that you'll be watching the film looking almost like it did when audiences sat shivering in their seats in 1933.