When a new police captain (Bertrand) arives on a small Carribean island, he vows to clean up police corruption and to break up the local voodoo cult. The cult, which is on the verge of ushering in a new age where their dark gods will rule supreme, go on the warpath against him. Can one honest cop defeat a cult specializing in zombie sluts and led by a crazed, tophat-wearing dwarf (Santanon), a voodoo priestess--or maybe just an exotic dancer in a really cool outfit who got lost on her way to a gig--(Tongolele) and a mysterious masked man (who can't possibly be the wealthy, eccentric plantation owner Van Molder (Karloff))? 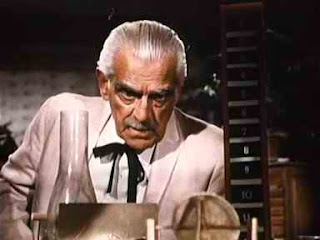 "The Isle of the Snake People" is to Karloff films that "Bride of the Monster" is to Lugosi movies. Both films were made at the very end of long careers, and both films saw that those careers ended on very low notes.

This movie is boring to the point where you must have a book to read, or someone to make out with, while watching if you are to have any hope of getting through it. There are some scenes that could have been disturbing if they didn't go on forever--like the opening vooodoo ritual with that creepy dwarf--but the only truly creepy scenes are limited to those featuring flesh-eating zombie women. Mostly, the film just trudges along, from badly filmed scene to a badly acted one, and onward into infinity. (Actually, if one took a hatchet to this film, cut it down to maybe 40 minutes in length and retitled it "Night of the Flesh-Eating Zombie Sluts", it might end up as entertaining. It might even end up coherent.)

Boris Karloff is the only good thing about this film. The scantily clad belly-dancing voodoo priestess might have been a plus as well... if she'd had a bag over her head. She's got one of those "I've been in the sex industry entierly too long" hard faces and it sort of ruins the fantasty aspect. But Karloff, like Lugosi in "Bride of the Monster" gives his part his all, and watching him--even if he seems old and tired--is as much fun as always. (His interplay with his puritanical neice (Julissa) who has come to the island to save the natives from the evils of alcohol shows he had magic up to the very end.

If you're a Karloff fan, pretend "Targets" was his last film and that "Isle of the Snake People" doesn't exist. You won't be missing anything... except a freaky dwarf and a belly-dancer that should have been wearing the mask instead of the cult leader.

If you're a completist who feels you must see and/or own every Karloff movie, I can't recommend that you get any of the stand-alone versions of this film. If you must have it, pick up one of the DVD multi-packs it's included in to get value for your money. (There's a particularly good one that includes "Night of the Living Dead" and two other films.)