'The Mummy' from 1932 remains best mummy move ever

After an archeologist accidentally restores him to life, a cursed ancient Egyptian high priest Imhotep (Karloff) sets about likewise reviving Princess Anckesen-Amon for whom he gave up everything so they can resume their forbidden love. Unfortunately, she has been reincarnated, and her spirit is currently residing within Helen Grosvenor (Johann), the daughter of a British diplomat. Imhotep hasn't let the natural order of things stop him in the past, and he's not about to let it get in his way now.

"The Mummy" is perhaps the best, most intelligent mummy movie ever made. It's more of a gothic romance story set in Egyptian surroundings than a monster movie, with Imphotep trying to recapture a love that he lost 3,700 years ago.

The actors in this film are all perfectly cast, and they are all at the top of their game.

Karloff is spectacular, conveying evil, alieness, majesty, and even a little bit of tragedy in his character with a minimum of movement. (Unlike most mummy movies, Imhotep isn't a bandage-wrapped, shambling creature, but instead appears like a normal human being; he is still dried-out and somewhat fragile physically, though, and Karloff does a fantastic job at conveying this.)

Johann likewise gives a spectacular performance, particularly toward the end of the movie as Imhotep is preparing to make her his eternal bride and she has regained much of her memories from when she Anckesen-Amon. Johann is also just great to look at. 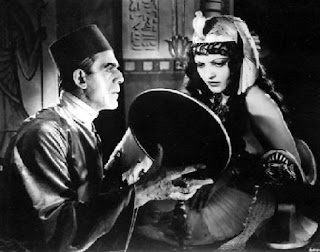 The two remaining stars, Manners and Van Sloan, are better here than anything else I've seen them in. Manners in particular gives a fine performance, rising well above the usual milquetoast, Generic Handsome Hero he usually seems to be. (Even in "Dracula" he comes across as dull. Not so here.)

The cinematography is excellent and the lighting is masterfully done in each scene. Karloff's character is twice as spooky in several scenes due to some almost subliminal effects caused by lighting changes from a medium shot of Manners to a close-up of Karloff... and the scene where Imhotep is going to forcibly turn Helen Grosvener into an undead like himself is made even more dramatic by the shadows playing on the wall behind the two characters.

There are some parts of the film that are muddled, partly due to scenes that were cut from the final release verson, or never filmed. Worst of these is when Imhotep is interrupted during his first attempt at reviving Anckesen-Amon, and he kills a security guard with magic during his escape. However, he leaves behind the spell scroll that he needs for the ritual. Why did he do that? It's a jarring, nonsensical part of the movie that seems to serve no purpose other than to bring Imhotep into direct confrontation with the heroes. (The commentary track on the version of "The Mummy" featured in Universal's "The Mummy Legacy Collection" sheds light on what the INTENTION was with that devolpment, but it just seems sloppy and badly conceived when watching the movie.)

While "The Mummy" may seem a bit slow to people who are used to Brandon Fraser dodging monsters--or even the Hammer mummy movies--it is a film that every cinema buff should see and even add to their personal movie collection. (There are at least three different DVD editions of the film available for sale as of this writing. However, the best value for your dollar is to pick up Universal's "The Mummy: The Legacy Collection". You'll get "The Mummy" with an excellent and very informative commentary track, as well as a bonus disk with the four mummy movies that Universal released in the 1940s. You can read more about the set at Amazon.com by clicking on the link below.)