Karloff is hilarious as a quirky supporting character in "Lured"

Scotland Yard's Inspector Temple (Coburn) hires sharp-eyed, sharp-witted, and sharp-tongued down-and-out American actress Sandra Carpenter (Ball) to serve as a lure for a serial killer who has been prowling through London's shadows, murdering young women he contacts through personal ads. With her Scotland Yard "guardian angel" Barrett (Zucco) watching over her, she undertakes the dangerous task of drawing out the insane killer. 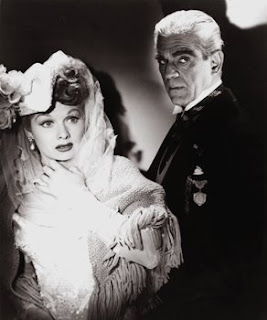 "Lured" is a well-done, light-touch police procedural thriller (with touches of romance and melodrama along the way) that features an all-star cast of 1940s B-movie actors (and a respected stage actor thrown in for good measure), all of whom deliver great performances.

The dialogue is snappy, the tense moments geniuinely tense, the funny moments genuinely funny, and the many red herrings tasty. Boris Karloff's character serves as the oddest and funniest fish of them all--and it's not a spoiler to say that he isn't the serial killer. Yes, it's the sort of part he often plays, but not here, and it will be obvious to viewers almost immediately.

I think this is a film that will be enjoyed by anyone who likes classic mystery movies. I also think that fans of Lucille Ball will enjoy seeing her in her pre-screwball comedy days. (Speaking of comedy, George Zucco's scenes with Ball are always amusing, as Sandra repeatedly inadvertantly helps Barrett solve the crossword puzzles he's constantly working on with stray comments.)