Welcome to the Boris Karloff Blogathon, a week-long celebration that spans over 100 blogs. To experience the full scope of this blogathon, click here.

"The Walking Dead" is an early genre-bending effort from Warner Bros., a film that mixed the gangster/crime drama genre the studio so excelled at with the fright/supernatural thriller genre that Universal and a growing number of small studios have been making tons of cash with. It's an unusual film that sees Boris Karloff playing a "monster" that is even more sympathetic than the ones he played in "The Mummy" and "Frankenstein."

Ex-con and all-around sad sack John Ellman (Karloff) is framed for murder by racketeers, he is unjustily executed in the electric chair, dying even as the governor is trying to reach the prison to stay the execution when a witness (Churchill) comes forward with evidence that clears him. The innocent man is given a second chance at life when Dr. Beaumont (Gwenn) brings him back to life with an experimental technique, but death has changed Ellman. Initially, he seems to be mentally disabled, but an encounter with the racketeer-allied attorney who helped frame him (Cortez) reveals that Ellman has changed in ways no mortal will ever be able to comprehend. 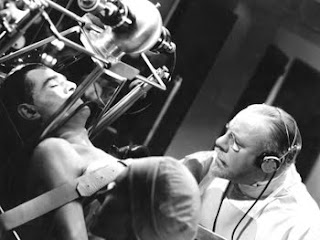 "The Walking Dead" mixes mad science, horror, and crime drama with a deftness that I wouldn't have thought possible. It's a far better than the similar cross of genres than Universal would offer in 1940, with Boris Karloff in the role of the scientist meddling with forces beyond mortal ken (review here), with an intelligent and multi-layered script full of unpredictable twists and turns; excellent pacing and beautiful, moody photography; sympathetic heroes you will be rooting for, and villains that you have no problem hating and won't mind seeing come to bad ends.

One of the most important factors making this film such compelling viewing is the excellent performances by its cast.

Edmund Gwynn plays a doctor who is more interested in first proving that he can bring the dead back to life and later interested in learning what happens to the soul after death than he is in John Ellman's health or sanity, He portrays the character with such likability that its impossible not to like him despite it all.

On the flipside, there is Ricardo Cortez, who plays an absolutely destible mob attorney who through the picture pretends to be looking out for Ellway's interests but who is really trying to see him put to death so he and his fellow criminals remain untouchable by the law. It's a character so slimy that we can't wait to see him get his just rewards, mostly because Cortez plays him with such a cool and detached grace.

And then there's Boris Karloff as John Ellway. Just like Karloff brought humanity to Frankenstein's Monster with a few gestures and body language, so does he convey the deep pain and confusion suffered by Ellway once he is restored to life. It's a confusion that's doubly fascinating, because as the film unfolds, it becomes apparent to the viewer that Ellway has returned from the Other Side with a limited sort of omnicience that allows him to know who the conspirators were that framed him for murder, but not why. 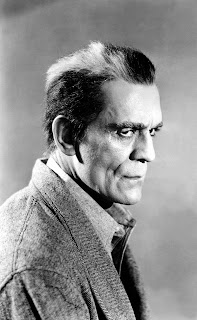 Without spoiling too much of the movie while discussing the aspect that I found the most interesting about it, I will reveal that Ellway spends the second half of the movie looking for the answer to his fate, but never receiving it, as there are other forces that are swirling around him, forces that are making the "untouchables" pay for their crime. And with each denied attempt at discovering why he was marked for death, his pain grows, and it's a pain that Karloff conveys with absolute perfection.

But Ellway's search for answers raises an interesting question about whatever forces govern life, death, and whatever comes after. Whatever they are in this film's world, they seem to have the ability to observe everything that happens with absolute clarity, but have no understanding of why something happens. Ellway recognizes the men who conspired to kill him when he sees them, but their motivation eludes him. Further, whatever the forces are, they also seem not to care about the whys of events... or at least they don't care whether Ellway gets his answers or not.

In the end, the film leaves all the characters wondering about life and death and fate (well, the ones who are still alive at the end of the film), and it will also give the audience members a little food for thought. The final scene is a bit maudelin, but it maintains the mysterious air that surrounded Ellway from the moment he was brought back to life and it really couldn't be more perfect.

"The Walking Dead" is an overlooked classic that every fan of Boris Karloff should see. He gives a performance that is on par with whatever of his more celebrated roles you care to mention. The film has recently once again become easily accessible to the public as part of the "Karloff & Lugosi Horror Classics" four-movie DVD pack. "The Walking Dead" is the only real classic in the bunch, but the price for the set is worth it for this film alone, so you can view the other included pictures as "bonus features." (None of them are outright bad, but they're not exactly great either.)