Karloff is present, barely,
in 'The Old Dark House'

Welcome to the Boris Karloff Blogathon, a week-long celebration that spans over 100 blogs. To experience the full scope of this blogathon, click here. 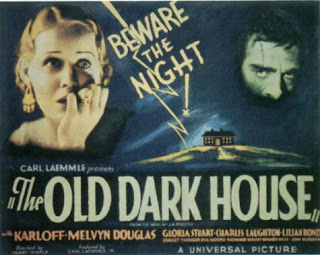 Many great masterpieces started out as commercial product, made by all involved as part of the everyday grind of making a living, just like a carpenter makes a table. They were also rarely seen as little different than the carpenter making the table. It therefore is not surprising that no matter how good the end product, if it doesn't catch on in the marketplace, it will be tossed aside for items that will bring in more money and pay those ever-voracious creditors.

One such product is "The Old Dark House," one of a number of nearly forgotten early horror films from Universal. Like other obscure films, it didn't do well at the box office... in fact, this one bombed so badly both on its initial release and re-release that it left craters. (While it broke box-office records in the UK, the film was a financial disaster in the US. It was also slammed by most American film critics when it was first released, with only the New York City critics seeming to like it.)

It's only natural that Universal Pictures and all those involved with the film tossed it aside and instead focused on things that put helped them keep up with the bills. The film was considered so worthless that it was believed to have been destroyed until it was rediscovered and restored in the late 1960s. At that time, Boris Karloff is reported to have seemed bemused when the man who saved the film from oblivion told him of the restoration effort; I imagine Karloff couldn't conceive of why anyone would spend money and time to preserve a failed movie.

Truth is, "The Dark Old House" was only a failure in a commercial sense. Anyone with a taste for classic movies who watches it now will recognize it as a film that should be held in equal regard to the other landmark Karloff features like "Frankenstein" and "The Mummy." Like those, it's a true classic that is exciting to watch even today. 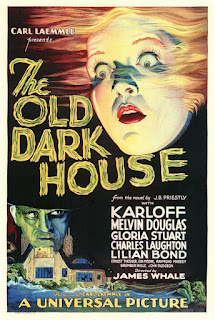 It was, ironically, the invoking of Karloff that probably helped doom this movie during both its initial 1932 release and its 1939 re-released in the United States. Universal's marketing material so emphasized the fact that Karloff of "Frankenstein" fame was in it that one is left with the impression that he is not only the star but that this is another monster-driven fright fest.

Both of those impressions are false, so it's no surprise that negative word-of-mouth killed the box office even in New York where the papers were praising the film.

Truth is, "The Dark Old House" is more of a mystery/comedy film than a horror movie. It's also a far more "British" film than "American" as far as the humor and characters go, so it's no surprise it was better received in the UK.

I assume most of you reading this have already seen "The Dark Old House," so you know what a treasure it is--as for me, the DVD was in my "To Watch" pile for about a year, until this Blogaton gave me the perfect opportunity to watch and write about it. Now I wish I'd seen it the very moment it arrived in the post!

If you haven't seen "The Old Dark House," you absolutely must check it out. It's available on an excellent DVD from Kino Video. Read on for my review of the film, and then use the Amazon.com link to get yourself a copy; it'll cost you about the same as a movie ticket these days, but it's a film far superior to most of the garbage polluting the cinema now.

A violent storm forces five travelers to take shelter in an isolated house in the Welsh mountains. Before the night is over, love will come to some of the inhabitants of the house while death will come for others. 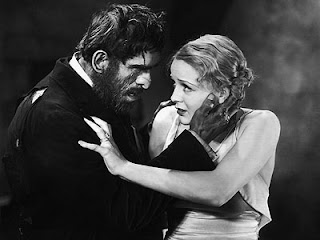 "The Old Dark House" is a quirky horror film from the days when the genre was still taking shape. It features an even mix of romance, dark comedy and melodramatic horror action in a household so riddled with insanity that even the House of Usher looks like the Cleavers by comparison. It's a tone and mixture of elements that has only rarely been achieved, with films like "Drag Me to Hell" and "Dead Alive" coming closest in the past decade.

When it was first released, it failed to appeal to the public nor to most critics, due in a large part to a marketing campaign that centered on Boris Karloff, who had just been featured in the mega-hit "Frankenstein." Karloff's role in this film is actually very minor, and he is more red herring than monster. He was also, strangely, more easy to recognize in the monster make-up than he is under the beard and facial scars of Morgan, the alcoholic and mute butler he portrays in this film.

The true star of the film is actually Gloria Stuart. Although it is a definite ensemble piece, Stuart appears in all the key scenes and hers is the character that is threatened in turn by each of the menacing figures in the old dark house. She gives an excellent performance throughout the film, It's a shame that this would be the only truly good part she would play in her film career, and the only decent role the casting directors at Universal chose to give her. (Interestingly, Universal executives wanted Stuart for the part of a "female Tarzan," and it was possibly her adamant refusal to even consider it that doomed her chances of ever playing a decent role at the studio again.) 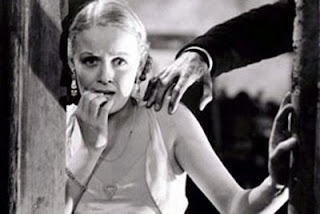 Aside from Stuart, the two other standout performers are Melvyn Douglas, whose roguish war veteran character is the heroic and romantic center of the film; and Bremer Wills, whose character arrives late in the picture, but whose chilling performance is nonetheless one of the most memorable things about the film.

Also of particular note are Lillian Bond, who is perhaps better here than in any other film she would make; Charles Laughton, who actually sympathetic for once; and Ernest Thesiger, who manages to be funny and scary at the same time.

The staging of each shot is also remarkable, as is the attention paid both to the visual composition of each scene, as well as the careful deployment of sound throughout. There is no music score for the film, but the sounds generated by the storm raging outside the house provide far more drama than any orchestra could do.

Because the film was a commercial disaster both in 1932 and during its re-release in 1939, Universal Pictures considered it a worthless property. They eventually let all rights revert to estate of the novelist whose work the film had been based on and the negatives were left to rot in storage in New York City. If not for a concerted effort on the part of filmmaker Curtis Harrington--a fan of the film and friend of director James Whale--it might have been lost forever by the late 1960s. Even the best available print shows some damage, despite the restoration efforts.

"The Old Dark House" is a film worth seeing again and again for the excellent performances and careful staging; you are guaranteed to notice something new each time you watch it. It's particularly worth watching for Gloria Stuart's performance. Karloff is, as usual, excellent, doing what he can with a part that doesn't give him very much to do.

Please come back here Wednesday for a review of "The Walking Dead," one of Karloff's most unusual genre-bending pictures.
Posted by Steve Miller at 12:01 AM