After escaping from prison, mad scientist Gustav Niemann (Karloff) sets out to gain revenge on those who helped imprison him, and to find the notes of the legendary Dr. Frankenstein so he can perfect his research. Along the way, he accidentially awakens Dracula (Carradine) and recruits him to his cause, as well as uncovers the frozen bodies of Frankenstein's Monster and Larry Talbot, the unfortunate wolfman (Chaney) and and revives them. Cue the torch-wielding peasant mob. 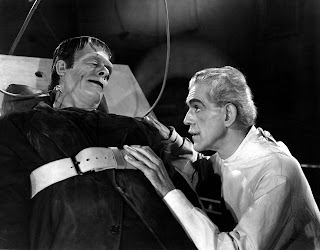 "House of Frankenstein" is one of three movies released in the 1940s that featured the latest addition to Universal's monster pantheon, the Wolf Man, teaming up with/battling the studio's two monster greats, Dracula and Frankenstein's Monster. As such, it is a sequel not only to "Ghost of Frankenstein," but also to "Frankenstein Meets the Wolf Man."

So, if you're confused about how the Monster from the fiery pit at the end of "Ghost of Frankenstein" to the ice floe here, you didn't skip a movie--events transpired that aren't found in this set. (I'll have more to say about the editorial choices made by Universal in compling the packages that make up the Legacy Collection when I post about "The Wolf Man: The Legacy Collection," but the bottom line is that I think "House of Frankenstein" should not have been included in this set as it's more of a Wolf Man movie than part of the Frankenstein's Monster series.)

"House of Frankenstein" unfolds in a very episodic way, with the part of the film involving Dracula feeling very disconnected from what comes before and what comes after. The main storyline sees Karloff's mad doctor questing for revenge while preparing to prove himself a better master of brain-transplanting techniques than Frankenstein, and the growing threat to his cause by his repeated snubbing of his murderous assistant (Naish). The whole bit with Dracula could easily be left out, and the film may have been stronger for it.

This is a very silly movie that is basically a parade of gothic horror cliches--I thought maybe I was having some sort of hallucinatory flashback to my days writing for the "Ravenloft" line--but it moves at a quick pace, and it features a great collection of actors, has a nifty musical score, and features great sets once the story moves to the ruins of Castle Frankenstein.

"House of Dracula" is one of the lesser Universal Monster movies--it's not rock-bottom like the mummy films with Lon Chaney, but it's almost there. The film is, to a large degree, elevated by the top-notch performers and it's almost too good for what they give it. (But it is interesting in a breaking-the-third-wall sort of way to see the actor who started the series as Frankentein's Monster come back to it in the role of a mad scientist.)