With true never-say-die spirit, Dr. Billings (Karloff) continues to work on creating super-soldiers that will help win the war against the Axis. However, the never-say-die spirit doesn't extend to his test subjects who are stacking up like cordwood in the basement. But will the new influx of visitors to his home--that is being converted to a bed-and-breakfast by an adventurous divorcee (Donnell)--bring more test subjects or the revelation of his failures? 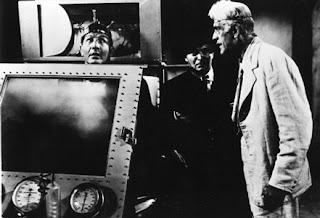 "The Boogie Man Will Get You" is a dark comedy with screwball overtones. The script is so-so, and it unfolds along predictable lines until a series of amusing twists at the end. However, the comic antics of Boris Karloff--as a senile mad doctor--and Peter Lorre--as a corrupt small town mayor/doctor/animal control officer/sheriff/whathaveyou--are entertaining enough to carry viewers through.

If you've only seen Karloff do drama or horror, this film is well worth checking out. In it, he shows himself more than capable of doing comedy... and he and Lorre make a great comedic duo. The film isn't the best, but Karloff excels, with he and Lorre making a fabulous comedic duo.

The film is one of four included in the Boris Karloff entry for Columbia's "Icons of Horror" DVD multipack series. As such, it serves as harmless filler, supplementing the three far better films in the set.