Title by Poe; Creep-factor by Karloff

Honeymooners Peter and Joan Allison (Manners and Wells) are stranded in an isolated house in a Hungarian backwater. Here, they become drawn into the evil Satanist Hjaldmar Poelzig (Karloff) and the revenge-plans of his one-time friend Dr. Vitus Werdegast (Lugosi). As the story unfolds, the depth of Poelzig's evil and perversion is revealed in its fullest, and it seems there will be no escape for anyone.

"The Black Cat" is a stylish, incredibly creepy B-movie. It takes place almost entirely within a house built upon the site of a ruined WWI fortress, with the lower levels being the decaying remains of the original structure and the upper floors consisting of a sleek, ultra-modern home. Both sections of the structure lend to the tone of dread that permeates the entire film--with the well-lit, clean rooms of the upper levels of Poelzig's home being even creepier than that the shadow-haunted lower levels thanks to some fine camera work--although the revelation of Poelzig's "exhibit" of beautiful women below has got to be the most terrifying moment of the film. (In fact, I'm hard-pressed to think of a more evil and perverted character present anywhere in these classic horror films than Poelzig: Satanism, treachery, mass-murder, pedophelia... you name it, Poelzig's done it/is into it. (Karloff doesn't have a lot to do acting-wise, other than to just be sinister... but, boy, does he do that in spades here!) 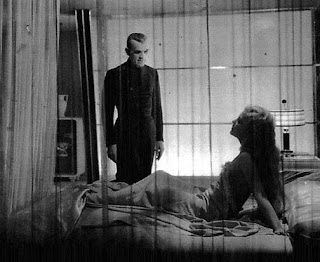 Perhaps the most interesting aspect of this film is Lugosi. First, those who watch "The Black Cat" will get to see that he was, in fact, a great actor at one time. The pain Dr. Werdegast feels when he is told his wife and daughter died while he languished in a Russian prison is conveyed with incredible strength, as is the mixture of pain and rage when he later learns the truth about their fates, as he and the Allisons manage to seize the initiative from Poelzig and his cultists. Second, it's interesting to see Lugosi playing a hero for once, even if a deeply flawed hero.

On a quirky note, I often complain that horror movies from 30s through the 60s and early 70s often just end: The story resolves and the credits roll without providing the audience with the nicety of a denoument. "The Black Cat" DOES provide what I wish more films would, yet here I almost wish that last minute or so hadn't been included. This is a film that probably should have ended while still in darkness.

While "The Black Cat" has absolutely nothing to do with the Poe tale that "suggested" it--it's got more in common with "The Fall of the House of Usher", I'd say--I think it represents a high point of the horror films that Universal was making in the 30s. I don't see it mentioned often, and I think it's a shame. It's a film that's worth seeing.

"The Black Cat" is one of three films featuring Boris Karloff included in the five-movie set "The Bela Lugosi Collection." The other two are "Black Friday" and "The Invisible Ray."