Karloff is Killer When He Meets Abbott & Costello 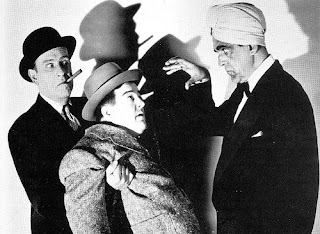 When Freddy (Costello), a dim-witted but harmless bellhop, is suspected of murdering a high-powered attorney, the arrogant hotel detective at the Lost Cavern Hotel, Casey (Abbott) decides to help him clear his name by prove that one of the other guests--many of whom were about to be ruined by the tell-all memoirs the attorney was about to publish. As evidence against Freddy starts to plie up (along with more bodies), a mysterious masked figure targets him for death as well... and wacky hi-jinx ensue.

"Abbott and Costello Meet the Killer" is a fast-paced, hilarious comedy that mixes the Bud and Lou's fast patter with a who-dunnit spoof. There are plenty of sinister suspects (with Boris Karloff leading the pack as a murderous swami), but the mystery isn't truly over until the final punchline (which is, literally, a punch line in this film).

Although the mystery elements of the script are weakened by virtue of having too many red-herring suspects, so virtually none of them are given any real development or screentime (with Karloff and Aubert being the only exeptions), the comedy aspects of the film are grand. The sequence where it's proven that some people truly are too dumb to die, and Freddy whiling away the time while waiting for the killer to arrive in the caverns from which the hotel draws its name, are priceless.

As I write this, this film is officially out of print, with no DVD or VHS prints in distribution anywhere. Its most recent home video release was in "The Best of Abbott & Costello Vol. III," copies of which may still be available in some retail outlets (and used via Amazon.com and elsewhere).