Karloff is at his best (and most evil) in 'Bedlam'

Welcome to the Boris Karloff Blogathon, a week-long celebration that spans over 100 blogs. To experience its full scope, click here.

During the 1940s, producer Val Lewton created a series of hit low-budget horror and suspense films that not only saved the studio from financial ruin (a situation created by a series of big-budget box office disasters, mostly under the guidance of Orson Welles) but introduced a range of horror movie stylistic techniques that remain in the filmmaker bag-o-tricks to this very day. 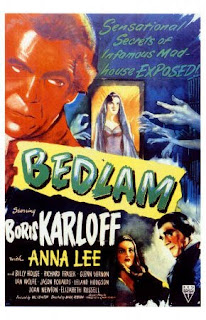 The final of these films was the 1947 film "Bedlam," which was also his third and final appearance Boris Karloff would make in a Val Lewton picture. The film is some of the very best work either man would ever be involved with.

When Nell Bowen (Lee), an actress turned live-in companion and jester for one of London's leading citizens (House) makes it a personal crusade to improve conditions at the Bedlam institution for the insane, she makes a personal enemy of its Apothecary General, Master Sims. She soon discovers that those who Sims feels threatened by end up as inmates at Bedlam, whether they are insane or not. 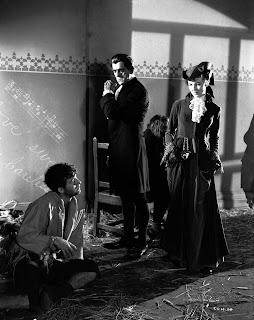 In "Bedlam," we see Boris Karloff playing the most despicable and evil character he ever portrayed during his career. Master George Sims is a self-centered little man who has achieved some small degree of social standing through toadying and by abusing his position by turning the government-operated asylum and its inmates into a sideshow attraction, complete with admission fees. Although he talks about compassion, it is clear that he has has none, both from his attitude and deeds. Everything within the walls of his asylum are there to boost his fragile ego, and anyone who threatens it from the outside, he brings under his control by having them committed by a board of governors that he has under his sway.

If played by a lesser actor, Master Sims would probably have been a boring character consisting of pure evil covered by a thin veneer of hypocrisy and oily charm. However, Karloff manages to infuse humanity into this monstrous figure, giving Sims a dimension that makes him just sympathetic enough that viewers can appreciate where he's coming from even while recognizing that he is an absolute villain. 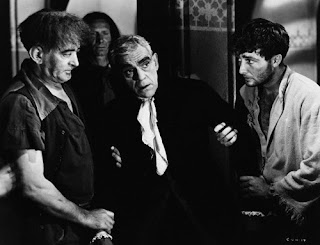 One of the key moments for Sims' is when he falls into the hands of the inmates and they put him on trial to determine if insanity drove him to commit all the cruel acts he is responsible for. Without ruining the film, I can say that Sims gives a speech that convinces the inmates that he is indeed sane, because his actions were driven by a hunger for recognition from his betters and a sad hope to be accepted as their equal. But, although Sims seems to be soul-searching and understanding that his behavior is misguided and wrong, it quickly becomes apparent that he will fall back into his old ways, because the only way for him to overcome what is ultimately an unsurmountable degree of self-loathing is for Sims to feel himself bathed in what he considers the reflected light from his "betters."

And it is this reflected light that starts the conflict between Master Sims and Nell Bowen. She not only shows Sims up in front of one of the nobles whose approval he so desperately wants, but she shows herself to be more favored than he when she isn't punished for displaying repeated and open contempt for him. Worse, Bowen doesn't need the approval that Sims devotes his entire life to gaining, so he has no real weapons to weild against her except his ability to force her into his charge and break her spirit and mind.

It is plain to viewers early on that Nell will ultimately end up at Sims mercy, because she refuses to back down, and as the film unfolds, much of the suspense comes from the fact that there seems to be no way out for Nell and that her strong spirit will get her killed. The confrontations between Sims and Nell, which never rise above verbal sparring, are really the heart of the film... and they are scenes that would not work half as well if it wasn't because the lines are being delivered by two great actors whose performances are bringing dimensions to the characters far beyond what would usually be expected from a low-budget drama.

These great performances also lift the film to the point where you're not quite sure what's going to happen... and not just because Val Lewton has delivered films with genuinely suprising endings before (is there anyone who can honestly say they saw the ending of "Cat People" or "I Walked With a Zombie" coming before it hit?), but because the characters have a degree of life to them that doesn't let us assume that the script will follow the pat ending where the heroine is rescued and the dastardly villain gets his just rewards. (And, to some degree, Lewton once again delivers a powerful and unexpected ending, perhaps the creepiest of any of his RKO films.) 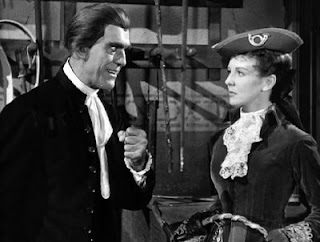 Of course, I also need to give some credit to Mark Robson, the film's director. He was an editor at RKO whom Lewton wanted to give a chance to direct, and for whom Lewton passed up the opportunity to work on films with bigger budgets.

After his early hits, RKO execs wanted to give Lewton more money to work with, but it meant that Robson would not have a chance to direct. Lewton chose to stay with the smaller budgets and the B-pictures, showing personal character and a degree of loyalty to his fellow creators that one wishes more people possessed.

And Lewton's faith in Robson was obviously well-placed. While most of Lewton's RKO pictures are lean efforts without a second of filler to be found, "Bedlam" is even tighter than the rest. There is not a single scene that doesn't start or end at just the right moment, and there is not a single shot that isn't perfectly timed or lit.

With the excellent performances from its stars, able assistance from a talented supporting cast, and great direction, camera-work and editing, "Bedlam" is a fine thriller that fans of classic movies should seek out.

"Cat People," "I Walked With a Zombie" and "The 7th Victim" may get most of the commentaries when it comes to Lewton films, while "The Mummy," "Frankenstein" and "Targets" get the accolades in the Karloff canon, but "Bedlam" is a film that deserves more attention from fans and reviewers alike.