Karloff refuses to hang around in this one.

Surgeon and brilliant research scientist Henryk Savaard (Karloff) invents a device that will revolutionize blood-transfusions and organ transplants, a device that is so effecient it can allow surgeons to perform impossible operations and literally be used to fully restore a dead person to life. However, when his final experiment is disrupted by the police and his volunteer dies, Savaard is tried, convicted, and hanged for murder. His loyal assistant Lang (Foulger), a brilliant surgeon in his own right, repairs Savaard's broken neck and uses the fantastic medical device to restore Savaard to life. Lang intends for Savaard to prove to the world that his device works and that if he had been allowed to continue his work, the volunteer wouldn't have died, but Savaard is more interested in taking his revenge against the jury, law enforcement officers, and medical people who scoffed at his work and condemned him to die. 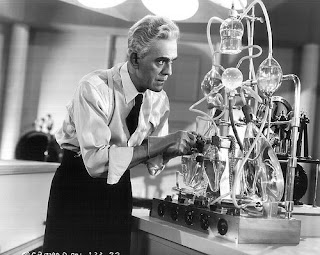 "The Man They Could Not Hang" is a neat little B-movie that starts out as a sci-fi thriller and takes a hard left about halfway through and turns into a "what if Agatha Christie were to write a story about a mad scientist taking revenge on those who wronged him" about halfway through.

The film is its best after Savaard has lured all those who wronged him to his house, trapped them, and is killing them off, one by one. The murders are particularly clever and sadistic, and this is one of those rare films where a "diabolical genius" actually comes across as a the genius he's supposed to be. (In fact, Jigsaw from the "Saw" series of horror films is a sort of great-grandchild of Dr. Savaard; they both put who they consider well-deserving victims in death traps and taunt them.)

The actors In "The Man They Could Not Hang" all give great performances, and Karloff is particularly noteworthy. The transformation he brings to Savaard shows how great an actor he was, as within the space of a very brief movie and limited dialogue and screen-time, he presents a character who changes from a driven, optimistic visionary with a desire to make the world a better place, into a bitter, twisted man who is deaf and blind to everything but his hatred and desire for revenge against those who humilated and scorned him. The way Karloff slips back and forth between Savaard's two personalities at the end of the movie when he is confronted by his daughter (Gray) is a fantastic performance.

The only strike against this film is that the last quarter seems a bit rushed. It would have been well-served by an additional ten minutes of running time, with a bit more time spent with Savaard's trapped victims, or maybe even a little more interaction between his daughter and her reporter boyfriend (Wilcox). The ultimate end to the film is perfect, though... I just wish the journey there had been a little bit longer.

I recommend this film for Karloff fans... and for those who like the "Saw" movies not for their gore, but for their villian. I think Dr. Savaard is a character you'll enjoy.