After being cheated out his latest security system by his former business partner, Steve Ranger (Hinds), inventor and security expert Dave Mallory (Karloff) sets out to gain revenge and force the crooked business man to change the deal to a fair one. Together with a petty thief (Cavanaugh), Mallory sets about using another invention--the Night Key--to override the alarm system he created and cause harmless mischeif in places protected by it. But, before Mallory manages to embarrass Ranger into submission, a ruthless gangster (Baxter) learn of his device and forces him to assist them in a major heist. 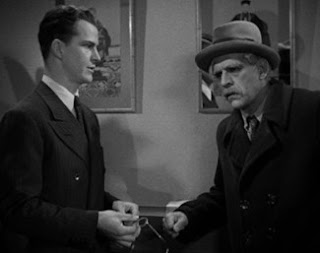 "Night Key" is a fun, fast-paced 1930s techno-thriller--it's like a "Firewall" or "Mission Impossible II" of its day, only with humor replacing the violence and a script written by someone who actually knew how to write and properly develop characters in a very short space. Of course, it also helps that the film features a fabulous cast, with everyone being perfect in their parts and everyone giving top-of-the-line performances.

Thanks to good direction and even better acting, the film provides many moments of touching comedy (such as the scene where Mallory and his criminal associate have fun opening every umbrella in an umbrella store) and intense excitement (such as when Mallory devises a way to escape the clutches of the gangsters who have kidnapped him and are holding his daugther for ransom). Everything in the film works perfectly, except for a rather pointless romance between Mallory's daughter and a security guard. However, this is such a minor part of the overall movie that it hardly has an impact.

"Night Key" is one of five little-known Boris Karloff films included in the "Boris Karloff Collection" from Universal. The set is available from Amazon.com for less than S25, and, despite the deceptive cover blurbs ("Five Chilling Horror Classics!" and "The Master of Horror in His Most Frightening Roles!"), it's well worth owning for any Boris Karloff fan. Karloff's grandfatherly Dave Mallory is not a frightening role, nor is "Night Key" a horror movie, calssic or otherwise.