Karloff is back in the lab with "The Invisible Ray"

Scientific genius Janos Rukh (Karloff) discovers an amazing new radioactive element, but accidentially becomes poisoned by it. His equally bright collegue Dr. Benet (Lugosi) devises a serum that surpresses the deadly effects, but the chemicals and radioactivity drive the already mentally unstable Rukh over the edge, and he soon starts using his new radioactive powers to kill everyone he feels as wronged him. Will the kindly Benet and the police stop manage to stop Rukh's murderous rampage in time to save Rukh's ex-wife (Drake)? 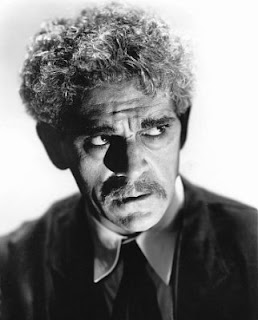 "The Invisible Ray" has all the makings of a cool little Science Gone Mad film (complete with Karloff delivering the "they called me mad" speech!), but it is sabotaged by pedestrian direction, some of the tinniest dialogue ever put on film, and a too slow build-up before the killings start. Throughout the film, I saw glimmers of what it COULD have been if someone had written decent dialogue for the actors to deliver, but as "The Invisible Ray" currently exists, it's not until the action move to Paris and Rukh goes on his mad rampage that the film becomes entertaining. (There's enough going on at that point that the bad dialogue is no longer such an irritant.)

I think the only reason to watch the movie is for seeing Lugosi play a role that's almost entirely unlike any other part he's played; everyone else appearing doesn't really deliver performances that are noteworthy for being good or bad... they're just in the movie. Lugosi, however, is not only the film's indisputable hero (even if Dr. Benet is just about Rukh's equal when it comes to Mad Science... but he uses the WonderTech and crazy discoveries for good!), but for once he isn't over the top and chewing on the scenery. He is intense, but he's not as outrageous as is typical.