Sir Nayland Smith (Stone) and an international group of archeologists led by Professor Von Berg (Hersholt) sqaure off against evil genius Fu Manchu (Karloff) and his diabolical daughter Fah Lo See (Loy), as both factions race to gain control of the regelia of Genghis Khan as they are the keys to the evil mastermind's latest scheme to conquer the world. 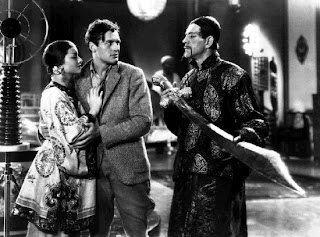 "The Mask of Fu Manchu" is perhaps one of the greatest "yellow peril" films, and it's the best use of the Fu Manchu character I've seen outside of Rohmer's original stories and the Marvel Comics series "Master of Kung Fu".

First off, the film has a great adventure story, with an even mix of weird science, bizarre torture-traps, supernatural hokum, savage natives lusting for a white girl to be sacrificed to dark gods, and, of course, Fu Manchu being thwarted with his own invention on the edge of victory. Secondly, its got a great cast that all give top-notch performances, even if Karloff is hidden beneath some ofthe very worst "China-man" make-up I've ever seen; yeah, the Orient may be alien, but that still doesn't mean Fu Manchu should look like a Martian. Finally, it's got some gorgeous sets that are augmented by some nice lighting work (and an even nicer use of Tesla coils and buzzing electrial devices).

Will some people in this overly sensitive age be offended by the film's racist undertones? Sure. But if they are going to fein outrage, I hope they'll notice that the British characters don't exactly come off as saints, either. Given their behavior, Fu Manchu isn't completely in the wrong.

"The Mask of Fu Manchu" is avaiable in the "Legends of Horror" DVD collection. It's the only one of the five included movies that features Boris Karloff, but the other films are excellent, rarely seen examples of the high quality films being made at the dawn of the horror movie biz.