Karloff + Corman = Terror (and terrible, in this case)

The Terror (aka "Lady of Shadows", "The Castle of Terror", and "The Haunting") (1964)
Starring: Jack Nicholson, Sandra Knight, and Boris Karloff
Director: Roger Corman
Rating: Four of Ten Stars

A French officer (Nicholson) during Napoleon's campaigns encounters a mysteriously alluring woman, Helene (Knight). Everyone denies she exists, but when he tracks her to the isolated, crumbling castle of Baron Von Lepp (Karloff), he discovers the girl may be ghost. 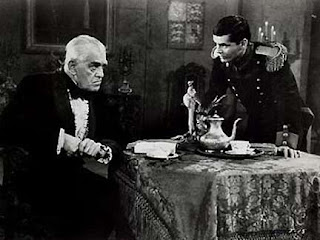 "The Terror" is basically pretty awful, and it shows every sign of having been made up as filming took place--the number of times where a character/actor seems completely oblivious to what he supposedly just experienced in the previous scenes far outnumber the times when there's continuity between scenes--it takes forever to get going, the dialogue is awful and repetative, and the film can't seem to make up its mind what the nature of Helene is. (This waffling goes far beyond the filmmakers wanting to keep the audience guessing.) However, there's enough here that if you enjoy classic horror flicks, you'll keep watching.

Unfortunately, just as the movie starts getting good, the filmmakers throw in what is perhaps the dumbest and most pointless "twist" to ever be committed to film. It is so lame that it almost cost the film an entire Tomato in my rating. (It earned it back, however, with the very startling final scene.)

"The Terror" is better than many Roger Corman movies, but not as good as the Edgar Allen Poe films that it uses stock footage and sets from. If you're a lover of Amicus, AIP, and Hammer Films from the 50s and 60s, I think you might find something worthwhile here, but otherwise, I recommend you take a pass. (For the record, I was torn between giving it 4 or 5 Stars... it teeters on the brink between those two.

"The Terror" is available on DVD from a number of differet distributors, but I think it's only worth getting if it's part of a multi-movie set. Unfortunately, virtually every copy of the film I've come across has been lacking the one element that might have lifted the viewing experience a bit--the vibrant colors of the original set and costume designs. All the DVD copies avaiable seem to have been made from faded and worn prints. (For a look at what "The Terror" could look like, we have to turn to "Targets," as the clips from the movie-within-the-movie are actually scenes from "The Terror.")