On this day in 1887, the great Boris Karloff was born. To mark his birthday, here's a review of one of his many films that deserve more attention than it gets.

Dr. Laurence (Karloff) devises a method to switch the intangible elements that makes up a being's mind from one body to another, but snaps when he is mocked by the scientific establishment and a rich newspaper publisher (Cellier) pulls his patronage for the doctor's research. He decides to use his method for his own gain, up to and including switching bodies with the son of his former patron (Loder) so he can marry the beautiful and intelligent Dr. Clare Wyatt (Lee). 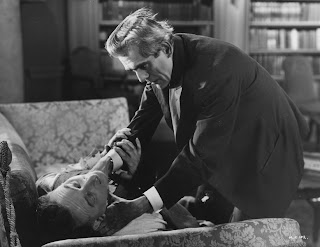 "The Man Who Changed His Mind" is perhaps one of the most intense horror films from the 1930s that I've come across. From the first time Boris Karloff's chain-smoking mad scientist crosses paths with Anna Lee's brilliant and independent-minded surgeon, you know things are going to end badly for more than one of the film's characters. But even with that knowledge, you're not going to guess how badly and for whom until the story is all but done unfolding. Even after nearly 75 years, this is a horror film that countless modern-day filmmakers need to study and emulate' their films would be far better for it.

The film is driven by a tight, expertly paced script that presents just the right mixture of horror and humor to make both aspects as effective as possible, especially given that most of the humor is of a pitch-black variety. The cast is also excellent and everyone is perfect for their parts and talented enough to bring depth to even the thinnest of characters. Dr. Laurence's assistant Clayton could easily have been just an obnoxious and unpleasant jerk, but Donald Calthorp brings enough humanity to the role that the viewer had a little empathy for him. The same is true even of John Loder's character who belongs to that most loathsome of 1930s comic relief characters--the wise-cracking, corner-cutting reporter; the superior script and dialogue makes even that character type bearable, and the viewer will actually fear for him when he becomes a target of Laurence instead of cheering the villain onward to success just to shut him up.

But the film's coolest--and most chillingly unexpected-- scenes is the one where Dr. Wyatt takes on the mantle of "mad scientist". The lighting, editing, and superior acting talent of Anna Lee all add up to the character going to a dark place that few heroic characters go even in the nihilistic modern horror movies. 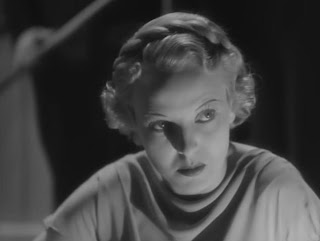 There is a hard coldness on her face and in her eyes that would have made even the mad Dr. Laurence shiver in fear, as she works switches and buttons on the mind-switching contraption. It's a performance that puts to shame even the one that I until now considered Lee's best--her turn as another strong-willed woman in Bedlam (review here, at the Boris Karloff Collection). It truly is one of the greatest moments in horror films, and I don't understand why more critics who fancy themselves experts in Great Cinema don't include it on their lists of "Top Fifty Horror Moments." Heck, it might even belong in the Top Ten!

"The Man Who Changed His Mind" is one of the many under-appreciated films from the early days of the horror genre. It is superior to a number of the more famous movies--including some of the ones from Universal that everyone has seen--and I encourage anyone who hasn't seen it to give it a try.