Karloff is top-billed bit-player in this disposable comedy

Kay Kyser (Kyser) and the wacky musicians and singers that make up his orchestra are booked to play at the 21st birthday party of their manager's heiress girlfriend (Parrish). Swing music, high-jinx, and attempted murder follow as Keyser must team with a renowned debunker of psychics also invited to the party (Lorre) who has also been invited to the event in order to reveal the true nature of a phoney spiritualist (Lugosi), who has been bleeding money from the young lady's gullable guardian. 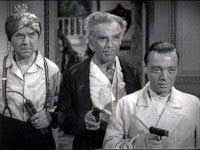 "You'll Find Out" is interesting viewing for two reasons.

First of all, it's the only film where Bela Lugosi, Boris Karloff and Peter Lorre appear together. The three actors don't have alot of screen time, but their parts are meaty and they get to show their best sides; even Lugosi has a decent part, something that was becoming increasingly rare for him at this point. (In a meta-critical sense, their appearance is an almost Three Fates and/or The Stages of Man sort of affair--Lorre is on the verge of acheiving super-stardom, Karloff is at the pinnacle of his career, and Lugosi is slipping from twilight and into darkness.)

Second, it's an example of the fleeting nature of fame. While Karloff, Lugosi and Lorre have some presence in the minds of virtually every movie fan--even if their names might be a bit vague--how many know who Kay Kyser is? And this despite the fact that Kay Kyser was every bit as big a star as Karloff and Lugosi in his time, the leader of a very popular novelty band that had numerous Billboard-charting hit records, was the centerpiece of their own weekly network radio show, and starred in seven movies, including this one. Some 65 years after retiring from show business during World War II, Kyser and his band are completely forgotten by all. You can watch this movie to see what place Slim Shadey will hold in the public conciousness in sixty years... not to mention what "8 Miles" will look and sound like.

As for the film itself, it's more corny than suspenseful, which is fitting given that it was not a vehicle for the three horror actors but for Kyser's orchestra. Some viewers might be dissapointed at this, but I've always enjoyed Bela Lugosi's comedic turns. Lorre also has some very funny scenes with Kyser, sometimes being the straight man, sometimes being the deliverer of the jokes... and doing an equally good job in either role. (You may notice by now that I've not said much about Karloff. That's because there isn't much to say. He plays a dignified, slightly sinister lawyer and he delivers his lines on cue. It's a decent part and it's key to the story, but there's not much else to say other than, "Look... Boris Karloff!"

Is "You'll Find Out" a classic? No, "Ghostbreakers" this is not. However, it holds up a little better than many other pieces of disposable cinema made for no purpose other than to cash in on a cross-marketing opportunity of a musician.