Karloff has small but crucial role in 'The Black Castle'

In the early 18th century, an English spy (Green) travels to Austria's Black Forest to determine the fates of two of his best friends and fellow operatives. They were last heard from as guests of an eccentric count (McNally) whom they had opposed in Africa. While trying to ferret out the count's secrets, our hero decides to rescue his innocent young wife from his clutches (Corday). 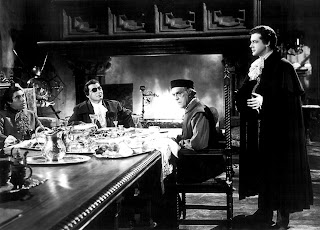 "The Black Castle" is an excellent and suspense-filled period drama that, although it's being told in flashback and you know that the hero and his love interest won't come to the dire end that they seem destined for, remains unpredictable until the very end. It's a film that builds steadily toward its final twist, a twist that few will see coming but that is nonetheless set up by everything that went before. It doesn't say anything good about modern screenwriters when, in a time where twist endings on suspense and horror films are all the rage, that a B-movie writer can do something far, far better than they come up with on their best days, in a time when they weren't common.

Aside from a well-done script, the film is further augmented by excellent sets and excellent cinematography and some fine performances by the entire cast. Of particular note is Stephen McNally, who, although he plays the ultimate Snidley Whiplash-type character who is dwells in the ultimate melodramatic gothic villian's lair--an isolated castle with secret corridors, torture chambers, burial vaults and a pit full of crocodiles, still manages to bring a little depth to the character. He injects just enough charm into this thoroughly evil character that I couldn't help but root for him ever-so-slightly in his effort to outwit the one-dimensional, more-righteous-than-righteous British agent.

Also of note are the performances by the two horror cinema great Boris Karloff. His role is small, but, like McNally he manages to bring infuse some depth into a character who might otherwise come across as just a sniveling slimeball. (Lon Chaney Jr is also seen, once again playing one of those menacing simpletons that he seemed to have been relegated to at this stage in his career... he does what he can with a fairly empty part.)

"The Black Castle" is a film that should appeal to lovers of classic movies, especially if they like their gothic romances with a side of twisted vengence. Although made in the mid-1950s, the film feels more like something from the 1930s or 1940s.