Karloff violates laws of nature in "Before I Hang"


John Garth (Karloff), a research scientist who devoted his career to cure the disease of aging, developes a successful anti-aging serum that has one teeny-tiny side-effect: It turns him into a mad killer whenever he sees blood. 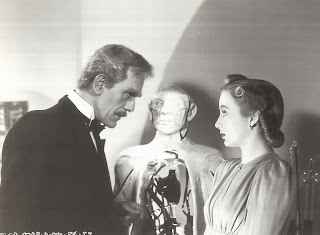 This is a decent little horror flick with sci-fi overtones and elements that resonate even louder today than they did when it was released in 1940. With its themes of mercy-killings of suffering old people, the death penelty, stem cell research, and anti-aging drugs (I can see Dr. Garth working in one of those "anti-aging clinics" we have a small chain of here in the Northwest), the fillm has something to say on a number of topics that remain the subject of heated discussion in the halls of both scientific and political power.

With good acting--Boris Karloff once again does a great job at transforming one character he is playing into another one, with just his facial expression and body language to help him--and the supporting cast are all excellent in their parts.

This is an interesting flick that might well be a real classic, due to its timeless subject matter. It's one of four Karloff films included in "Icons of Horror: Boris Karloff."