When threatened with eviction by his cold-hearted landlord John Black(Rathbone), undertaker Waldo Trumbull (Price) decides it's time to work on actively expanding the funeral home's business... by sneaking into the bedrooms of wealthy old men, smothering them in their sleep, and then being onhand to make the funeral arrangements. Eventually, Trumbull decides to end his rent problems once and for all by making Black his next "client", but things go awry when Black won't stay dead.

"A Comedy of Terrors" is a hilarious horror movie spoof where a collection of dramatic and horror greats get to show off their talent for comedy and screwball antics. It's even more fun to watch the actors like Price (who plays a scarcastic, mean-spirited boozehound as oppsed to his usual suave character), Karloff (who plays a senile fool), Lorre (who gets to be the love interest!), and Rathbone (who is great as the sword-fighting, never-stay-dead landlord) do characters who are either totally different from what they usually play and/or wildly and hilariously over the top. 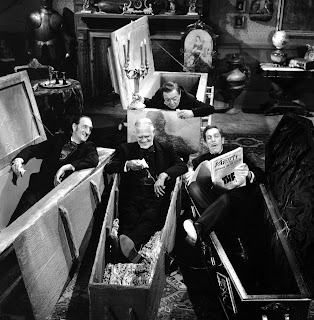 The film drags a little bit when the gags surrounding Rathbone's character get a little repeative, but the spectacular performances of its four great stars and the swift-running patter of Richard Matheson's breezy script still keep the energy high and the laughs coming. I think this film is a must-see for fans of its stars and for lovers of horror comedies.

As of this writing, this movie not available from any distributor. Copies may still be on hand at certain retailers. I recommend checking Amazon.com affiliates for the best prices should you want to own this movie.