Skinny dipping is hazardous to your health on 'Voodoo Island'

When a professional hoax-buster (Karloff) is hired to investigate a supposedly cursed island where a hotel magnate wants to develop a resort, he and his party find their journey there disrupted by a string of strange occurances. The most unexpected horrors await on the island, however. 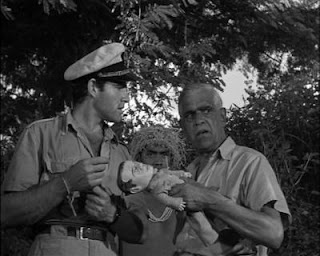 "Voodoo Island" is a film populated by fascinating, well-acted characters. Karloff's devout skeptic Philip Knight; Tyler as Adams, his Girl Friday with the photographic memory and endless suite of skills; Cook Martin Schyler, the greedy plantation owner who knows more than he tells; and Reason as Matthew Gunn, the boatsman with a troubled past. Unfortunately, these fascinating, well-acted characters are in a script that spends too much time getting to the island, gives us too much romantic subplot and not enough monsters once the characters are there, and then ends when we finally get to the sort of stuff we'd be watching the movie for in the first place.

The film is at its high point when architect Clair Winters (Engstrom) decides to go skinny-dipping in a particular idyllic looking lake, and gives us the first indication that there really is a grave threat on the island (aside from the natives who have the power to lurk unseen in really thin brush cover)... and this is a pretty weak highpoint. The voodoo build-up of the first half of the movie doesn't seem to go anywhere, and the hoax-busting Philip Knight doesn't really get to bust a hoax, nor does he get his come-uppance through the supernatural. I'm not entirely sure what sort of movie the filmmakers were trying to make, but whatever it was, they failed. It's too bad that a good cast and a collection of interesting characters were wasted in such a crappy script.
Posted by Steve Miller at 2:47 PM