Boris Karloff started the decade of the 1930s playing Frankenstein's Monster, and he ended the decade the same way. It is the role that brought him the greatest fame and it's fitting that we start this archive of Karloff reviews with those movies.

Henry Frankenstein (Clive), a true madman with dreams of "knowing what God felt like" when he created life, successfully animates a monster made from parts taken from several corpses. Unfortunately, abuse heaped on his creation by an idiot assistant (Frye) and Frankenstein's own missteps causes the creature (Karloff) to go bezerk and flee into the countryside. Soon, Frankenstein's Monster comes back to haunt him and those he cares about.

"Frankenstein" is one of the great monster movies that started the horror genre, so I feel a bit awkward about not liking it more than I do. I feel like I should be giving it a rating of 8 or 9, but all I feel it deserves is a low 7.

That is not to say that the film doesn't have some great moments. Boris Karloff gives a great performance as the creature who is clearly yearning for the sort of comforts every human being wants, but receives nothing but abuse. It's truly the only film portrayal of the Monster that made me feel sorry for it. The sets are also spectacular, the lighting and camerawork fantastic, and all the actors give excellent performances (but Karloff truly excels).

Where the film doesn't work for me is on the level of script and character interaction. I find it impossible to believe that Frankenstein's fiance Elizabeth (Clark) would want to go with a walk in the park with Frankenstein after the raw, total madness she witnessed when he brought his creature to life,and I find it even harder to believe that their mutual friend Victor (Boles) wouldn't be doing everything in his power to keep her from the marriage. I understand that horror movies Back In The Day tended to move rather swiftly along as far as characters go, but the lack of reaction to Henry's insanity really ruined the entire picture for me.

I think this movie is a must-see for anyone who considers themselves a film-buff or a fan of the horror genre, as it (along with "Dracula" and "White Zombie") set many of the ground-rules for horror films that persist to this day. However, as gorgeous a film as it to look at, as great as all the actors are, it suffers from some major story issues that may get in the way of your enjoyment.

As monster-maker Henry Frankenstein (Clive) is recovering from the near-fatal injuries he received at the hands of his monstrous creation, he is approached by the sinister Dr. Pretorius (Thesiger). Pretorius is a mad scientist, who, like Frankenstein, is obsessed with creating life. He has allied with Frankestein's creation (Karloff) in order to force Frankenstein to create a mate for it, so that Pretorius may learn Frankenstein's techniques. Frankenstein must create this other creature, or his own wife (Hobson) will be killed.

"Bride of Frankenstein" is presented as a direct sequel to the 1932 film "Frankenstein", but is somewhat divorced from that movie. First off, it's set up like a fictional story being told by Mary Shelley (Lanchester). Second, the film has a higher comedy element than the original. Third, a number of characters are somewhat different than they were in the first film, with Frankenstein being less of a complete lunatic, who actually wants to give up the whole monster-making gig until Pretorius and Frakenstein's Monster force him to make a mate for the original creation; and Frankenstein's Monster, who has grown in intellect while wandering injured in the wilderness. 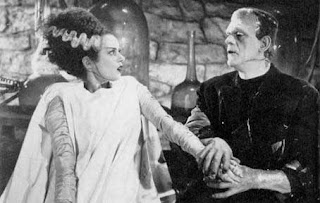 What remains the same, however, is the tragic quality of the Frankenstein's monster. While the monster commits acts of genuine evil--where in "Frankenstein", he was mostly acting out of ignorance or self-defense--these are balanced by the presentation of the monster as a deeply lonely, unhappy creature who has no place in, purpose in, or connection with God's creation. The fundementally tragic nature of Frankenstein's creation, and the fact that the most evil players in the story are Frankenstein and Pretorius, has never been driven home in any other Frankestein film than in the final ten minutes of "Bride of Frankenstein." That final reel is one of the greatest horror sequences to ever appear on screen.

"Bride of Frankenstein" is also remarkable for the amazing sets and camera work. The fantastic use of lighting and quick cuts, and the twisted angles in the buildings serve to underscore both the horror and some of the scenes of absurd humor in the film.

Wolf von Frankenstein (Rathbone) returns with this family to his ancenstral home in the hopes of rehabilitating his father's name. His high hopes soon turn to bitter ashes as the villagers refuse to give him a chance--except for the police captain (Atwill) who has more cause to hate the Frankenstein name than any of the others--and he is soon drawn into a sinister scheme launched by psychopathic former assistant of his father (Lugosi) to restore the Frankenstein Monster (Karloff) to life.

"Son of Frankenstein" is one of the true classics among horror films. As good as "Frankenstein' and almost as good as "Bride of Frankenstein", it features a top-notch cast, great camera-work, fantastic sets, and a story that's actually better constructed than any other of the Universal Frankenstein movies.

Particularly noteworthy among thge actors are Bela Lugosi and Basil Rathbone. Lugosi is gives one of the best performacnes of his career, and as I watched, I once again found myself lamenting that he didn't do more comedic roles than he did. He manages to portray the crippled Ygor as funny, pitiable, and frighteing, showing greater range in this role than just about any other he played. The funny bits show a fabulous degree of comedic timing that Lugosi only had the opportunity to show on few other occassions. Rathbone is also excellent, as the high-minded dreamer who is driven to the edge of madness by frustration, fear, and guilt. (He may be a bit too hammy at times, but he's generally very good.)

Lionel Atwill is also deserving of a fair amount of praise. I think he is better here in his role as Krogh than in any other film I've seen him in. In some ways, "Son of Frankenstein" is as much Krogh's tale as that of Wolf von Frankenstein so pivotal is his character to the tale, and so impactful is Krogh's eventual confrontation with the monster that tore his arm off as a chld. Atwill also manages to portray a very intelligent and sensitive character--perhaps the most intelligent character in the entire movie.

One actor that I almost feel sorry for in this film is Boris Karloff. The monster has very little to do... except lay comatose and go on mindless rampages. ANYONE could have been in the clown-shoes and square-head makeup for this film, because none of the depth shown in the creature in the previous two movies is present here. (While the whole talk about "cosmic rays" and the true source of the creature's lifeforce is very interesting, the monster isn't a character in this film... he's just a beast.)

If you would like to add these films to your own collection, they are avaiable on DVD for reasonable prices at Amazon.com. The best value is the "Frankenstein Legacy Collection", which includes the three films discussed above, two others, and lots of bonus features. Click on the cover images below for details.